Hostages of Maduro. How Venezuela rolls over the brink of civilization

Hostages of Maduro. How Venezuela rolls over the brink of civilization

Record inflation of 13 thousand% and about 3 million citizens who left the country – before that Venezuela brought its president’s policy, which is now going for a second term.

If you reject the constant feeling of hunger and the desire to go somewhere out of the country, there was no greater dream for Venezuelans than early presidential elections. Achieving them, citizens went out to mass protests, at the risk of getting into jail or under bullets. And now the day of voting is scheduled for April 22, but there is no joy. Because these elections not only will not remove Nicholas Maduro, whose government has brought the country to the handle, but will extend his power for at least another 6 years. So, farewell to the last hope.

Chaves on the contrary

The restriction on the number of presidential terms in Venezuela was canceled in 2009. The price of oil was kept at a fabulous height, generous social programs seemed to prove the advantages of local, “Bolivarian” socialism. And the broad masses of the people, who felt pleasant satiety, were ready to make the reign of the charismatic Hugo Chavez eternal. In October 2012, Chavez became president for the fourth time, but it did not even go to the inauguration: the cancer killed a man who seemed to have successfully continued the cause of the Cuban revolution.

The former vice-president Nicholas Maduro, and in principle a man of gray, and against the backdrop of sparkling Chavez – gray depressingly. Although Chavez managed to announce the vice-president as his successor, Maduro nearly lost to the right-wing candidate: the gap was almost a half percent. Doubts about the fairness of the calculation still exist.

And everything would be fine, if there are not many ordinary government leaders, but in 2014 the prices for oil collapsed, which hit Venezuela more than in any other country. Possessing the world’s largest (!) Commercial oil reserves and receiving more than 95% of the foreign exchange earnings from its sale, the “socialist” Venezuela practically curtailed another large-scale production, having previously nationalized it. The country bought all the necessary goods in foreign markets. When oil dollars became acutely scarce, imports collapsed, which also led to the halt of those enterprises that worked on imported raw materials. The country was in a situation of total deficit.

In the current economic chaos of the opposition, it was not difficult to convincingly win the parliamentary elections in 2015 – the first time in 16 years. Socialists received only 55 seats out of 164 in the National Assembly. Then, it seemed, and the end of Maudro, but it was just the beginning. The power of the opposition parliament was neutralized very simply: the president began to issue regular decrees on the emergency economic situation, giving him extended powers and the opportunity to ignore the legislators. As soon as the decree expired, another was issued.

The opposition tried to solve the problem differently by organizing a referendum for the resignation of the president. To start the procedure, it was required to collect signatures of at least 20% of citizens. Collected, spending a few months and a lot of energy. The Central Election Commission, controlled by the Socialists, announced the falsification of signatures. Street protests were brutally suppressed. If in 2014 43 people were killed in fights with the police and 800 were wounded, in 2017 – 124 killed and about 2 thousand wounded.

It ended with the fact that the opposition did not deal with Maduro, but vice versa. On July 30 of last year, the Constitutional Assembly was elected, which terminated the powers of the parliament. Even according to official figures, 41% of citizens took part in the elections, sociologists counted 18%. The new organ was staffed with trusted social functionaries.

But now they announced early presidential elections. Only representatives of opposition parties are denied participation. Maduro, maybe even a gray, but tenacious, power does not intend to miss.

The branch of hell

“As soon as elections are held, I guarantee you a new level of economic prosperity,” Nicholas Maduro said to his compatriots. What is Venezuelan prosperity at the current level?

The minimum wage now is $ 3. And not a day, a month. Result of the poll: 87% of the population do not have enough money for food.

Some products or essential goods can be purchased in state stores, presenting an identity card (fighting against speculation), but there is no guarantee that a long standing in the queue will be effective: the goods are disassembled or not delivered. Many products and things in stores do not happen in principle. They are on the black market, but they are worthless money. The money is available to those who distribute the deficit, in Venezuela, they are power structures.

Everything that is bought for currency is expensive. For example, the purchase of a condom will cost one-third of the minimum monthly wage. It would be fun, if not for the wild growth of sexually transmitted diseases. And they have nothing to treat, and there are no preventive measures for 100 thousand HIV carriers. The hospitals do not have everything – even drinking water and soap, often there is no electricity. The lack of necessary medications is 85%. Antibiotics patients and their families, if they can, buy on the black market. As early as 2015, when statistics were from the Ministry of Health, infant mortality in the first four weeks after birth was 2%. Since then, it has definitely not diminished. 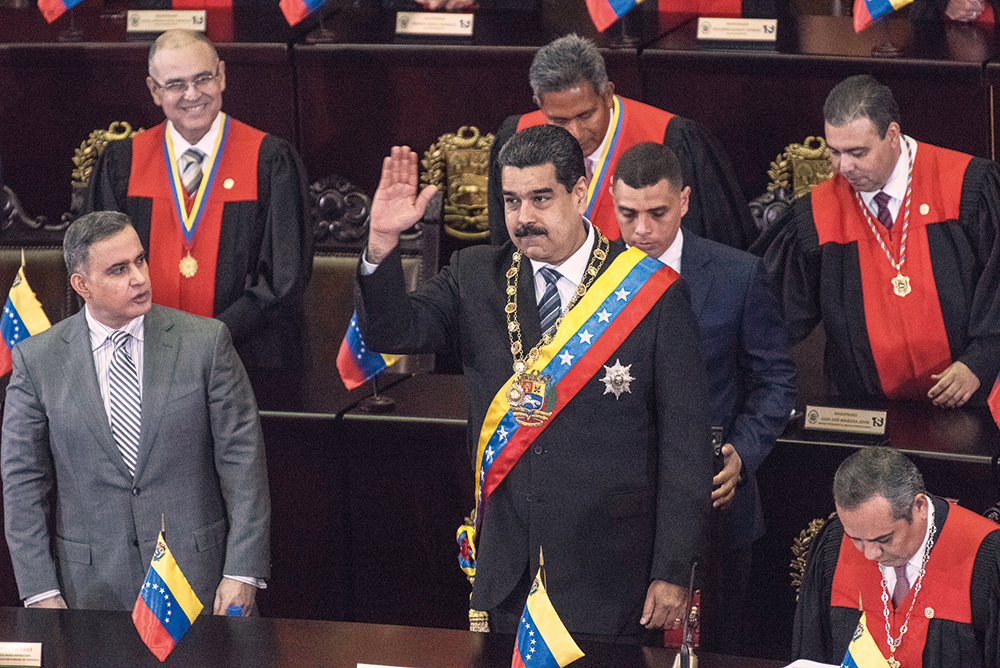 Nicholas Maduro virtually destroyed not only the opposition, but also Venezuela itself

Long-forgotten diseases – diphtheria and malaria – returned to Venezuela. The epidemic last covers half the states. Again, this simple disease for modern medicine can not be treated, so deaths are not uncommon. And it spreads because of the poor cities thousands of Venezuelans go to the Orinoco river basin, where they try to wash gold on nationalized but abandoned mines. Naturally, no one in the jungle does antimalarial prophylaxis. Moreover, there the power does not belong to the state, but to competing gangs.

Crime is another way to survive at the expense of others. About 40% of Venezuelans said they were robbed last year. Venezuela is literally a murderous country: an average of 92 people are killed every year for every 100,000 people a year. In the capital, Caracas, it is still worse: 140 corpses per 100 thousand.

Kidnapping flourishes. On February 12, the media reported the release of 72-year-old mother Elias Diaz, a player of the American baseball team Pittsburgh Pirates. A year ago for the son of the famous basketball player Juan Manaure everything ended differently: the 15-year-old boy was kidnapped by the kidnappers.

It’s no wonder that all who can, run from this hell. Only in neighboring Colombia already moved more than 600 thousand people, almost 100 thousand of them – only for the past November. Refugees are clogged in the border towns of Brazil. The total number of those who left their homeland in recent years is estimated at 3 million people – out of the 30 million population. Venezuelans are leading among refugees in the United States. The scale of the outcome is quite comparable with the migratory crisis, which put Europe on its ears several years ago.

When Maduro talks about a new stage of prosperity, he hardly means inflation of 13,000% and a 15% reduction in the economy predicted by Venezuela in 2018 by the International Monetary Fund.

The government has not given its statistics for a long time. In 2017, the IMF estimated inflation at 800%, the reduction in the economy – at 10-15%. With the IMF, the Bolivarians, by the way, categorically refuse to cooperate for ideological reasons, although everything is bad with external debts. At the end of last year, Venezuela owes creditors about $ 150 billion, with reserves of less than $ 10 billion. And this is with an annual income for 2017 of $ 100 billion, most of which will go to debt servicing.

What does Nicholas Maduro hope for? Apparently, only the fact that oil prices again will fly under the clouds. That the United States, in spite of the threats of Donald Trump, will not dare to choose a military option for the removal of socialists from power. And in fact, Venezuela, although relatively close, in one hemisphere, but twice as large as Iraq. And the “gringo”, the Americans, here many people do not like from habit. And the “gringos” themselves, which remain the leading trading partners of Venezuela, are unprofitable to introduce an oil embargo: US companies profit by selling their light oil, which Venezuelans mix with their heavy for sale.

The neighbors of Venezuela hope for the effect of diplomatic pressure. Maduro was not invited to the annual meeting of the leaders of Latin American countries in the capital of Peru, Lima, thereby expressing his attitude towards the announced elections far from the standards of democracy. Outraged Maduro said that he would not ask anyone, but he would come to Lima himself.

The Venezuelan opposition does not hope for anything, it seems. Defeated, morally repressed and disunited, it markedly reduced the protest activity. From a certain level of impoverishment of the idea of ​​sustenance, civil anger is superseded. It’s easier to leave than to achieve change. The government only welcomes the outcome of the dissatisfied. Conspiracies of well-fed military men, who have mastered currency flows and speculation with pleasure, are not afraid of socialists.

In summer, suddenly appeared a national hero, police officer Oscar Perez. Capturing the helicopter, he fired at the Supreme Court building and urged his compatriots to revolt. They did not believe him, they did not send for him. In December, his small partisan group was surrounded in a suburb of Caracas and destroyed, despite Peres’s willingness to surrender: he did not want to suffer civilians who were with him, including a woman and a child. Nothing, they shot from grenade launchers with a woman and a child. Only after watching the video stream of violence, which until the very end of the rebel led to Instagram, Venezuelans realized that they lost the real hero. But there was not yet a chance to repeat his feat.

Resistance is useless, inspires all Maduro, continue to build socialism.